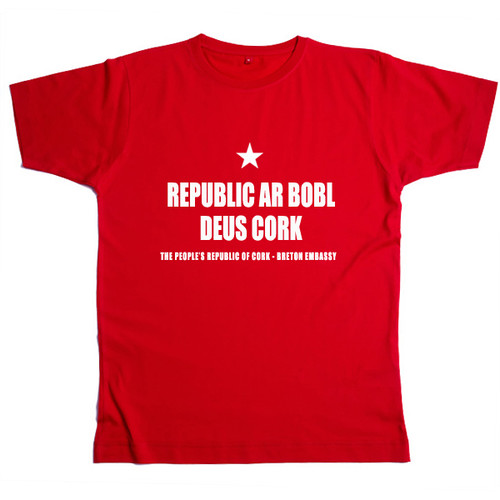 Official Breton version of the Peoples Republic of Cork t-shirt. Brittany is an area several times the size of Cork in the north west of France and connected by regular sailings from Ringaskiddy in the People's Republic to Roscoff with Brittany Ferries' passenger ship Pont Avon.


TOP TEN BRITTANY & BRETON FACTS
1. The area has a population equivalent to that of the Republic of Ireland at over 4 million.
2. It's principal city is Nantes with a metropolitian population of 800,000.
3. Almost all public signage in Brittany, like Ireland, is billingual with Breton on top and French underneath.
4. There are approximately 210,000 native Breton (Brezhoneg) speakers.
5. Breton is a Celtic language but more related to Welsh and Cornish than Irish or Scotish Gaelic.
6. The language is mainly spoken in the west of the region, especially around Roscoff ('Rosco' in Breton).
7. French is the only official language of France and Breton is the only Celtic language not officially recognised by its government.
8. There is a Breton speakers association in Ireland and at the time of writing there are regular Breton classes in An Spailpín Fánach on South Main St.
9. Brittany Spears was not born or conceived in Brittany and is not believed to be a strong Breton speaker.
10. You can see and listen to a few young Breton (Brezhoneg) speakers here


Printed in Cork by Corkonians!

Size Guide (We're happy to exchange sizes if you're not happy once it is in perfect condition).